UMNO leaders launched a two-prong attack on DAP to exploit Hadi’s “May 13 if third vote restored” statement, including UMNO cybertgroopers launching a campaign of lies and demonization on social media, including twitter-bombs, against DAP leaders

UMNO leaders launched a two-prong attack on the DAP to exploit PAS President, Datuk Seri Abdul Hadi Awang’s “May 13 if third vote restored” statement, including a vicious campaign of lies and demonization on social media against DAP leaders by UMNO cybertroopers.

In past few weeks, my twitter account had been spared twitter bombs by UMNO cybertroopers, but in the last few days after Hadi’s statement, it became the target of several series of twitter bomb attacks, through trolls and fake multiple accounts, spreading lies and defamatory messages and graphics.

One theme of the twitter-bombing was to accuse me of being the cause of the May 13 race riots in Kuala Lumpur, such as the tweet “TAHUKAH ANDA? @limkitsiang adalah pencetus Rusuhan Kaum 13 Mei.. #DAPRasis #S14”. 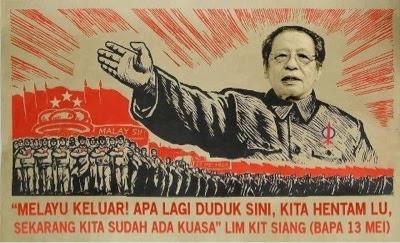 Those who sent these twitter-bombs know that this is pure defamation, as I never said these words, and I was never in Kuala Lumpur from May 11-13, 1969 or was in any way involved with the May 13 race riots – which is why those who posted these tweets dare not use their true names and identities for they would be hauled to court to pay heavy damages for defamation.

I am still intrigued as to why I am now accused as a “communist” by the faceless Umno cybertroopers after the 2008 and 2013 General Elections, as none of the six Prime Ministers, from Tunku Abdul Rahman onwards to Tun Razak, Tun Hussein, Tun Mahathir, Tun Abdullah and Datuk Seri Najib Razak, had ever dared to make any such accusation in the past 49 years of my political life for they know it is not true.

Otherwise, we are witnessing one of the biggest failures of the Special Branch in the past five decades - to allow a “communist” to be in Parliament for over four decades!

The blitzkrieg of lies and demonization by the UMNO cybertroopers against DAP leaders in the past few days is the latest proof of the hypocrisy of the Minister for Communication and Multimedia, Datuk Shabery Cheek about taking firm action against internet abuse in the country, especially those involving the dissemination of slanderous and seditious matter on social websites.

In fact, Shabery Cheek must answer whether he is responsible for these defamatory and seditious attacks by UMNO cybertroopers as it stretches the imagination that such internet abuses could occur under his nose without his knowing about them.

The second prong of UMNO offensive was for UMNO leaders to jump into the fray to give instant and unstinting support to Hadi for his “May 13 if third vote restored” statement, and in the past few days, Hadi’s statement was given greater prominence than those of the UMNO President and Deputy President in Utusan Malaysia – the first time in the history of the UMNO mouthpiece!

When Deputy Prime Minister and Deputy UMNO President, Tan Sri Muhyiddin Yassin claimed that Malaysia was among the “most democratic” of democracies despite the absence of the third vote, Malaysians are immediately reminded of another of his memorable sayings – that Malaysia has “one of the world’s best education system” when Malaysian universities have fallen out of the world’s top university rankings and Malaysia’s 15-year-olds are four or five years behind their peers in Shanghai, Singapore, South Korea, Hong Kong and Taiwan in the three critical subjects reading, science and maths according to international student assessments.

But what takes the cake was when Muhyiddin took side with Hadi and questioned the adverse effects on unity in a restoration of local council elections, referring to “imbalanced” racial representation where “the majority of urban areas have a heavy concentration of non-Bumiputeras”.

By this logic, State Assembly and Parliamentary elections should also be abolished.

Will Muhyiddin next made such suggestions, though still claiming to be the “most democratic of democracies in the world”!

In any event, what right has Muhyiddin to talk about national unity when he still claims that he is “Malay first, Malaysian second”?